I shared my inspirational true story publicly for the first time in Chicago at the Empower Network “Get Money” 2013 event.

This video was taken at an NDA event that is being sold in the Empower Network back office for $297, so I am probably NOT supposed to post this!  So many people have told me how inspired they are by my inspirational true story that I wanted to let you see it before they make us take it down! 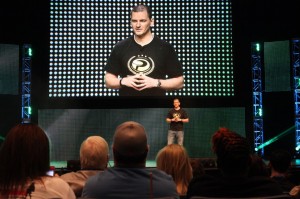 I never would have thought that I would be on stage with 5,000 people when I joined Empower Network a little over a year ago!  This has definitely been a big blessing to my life.

I just want to tell you a little bit about who I am & my background; because I am a really religious guy unlike some of the other leaders in Empower Network…

But I am a religious guy.

The cool thing about Empower Network is that you can be whoever you want to be.  You can be religious.  You can be not religious.  You can do what you want, and that is what I truly feel we should all be like.  We should accept everybody, because those of you who ARE religious as well know that Jesus doesn’t judge people; like I have heard David Wood say as well in the past.

I’m actually Mormon, by the way.  We don’t drink, we don’t smoke.  We don’t commit adultery.  We don’t sleep together before marriage.  We don’t even drink caffeine (you can but choose not to).

Inspirational True Story by Mike Hobbs – Why My Smile is Crooked

The reason I tell you this is, because… 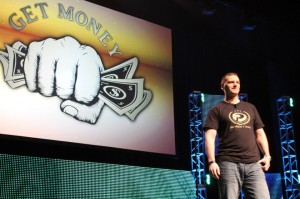 When you say people struggle…  I don’t even think that you can even explain my situation at that point.  We owned a house.  We were four months behind on the mortgage.    We had to borrow about $4,000 from my mother-in-law’s mom, just to catch up on the mortgage (My mother-in-law was actually in audience hearing me say this)  We were never able to pay that money back because she passed away.

We eventually still lost the house to foreclosure.  We just racked up the debt (100k to be exact).

But I was so committed to making the business work.  I did not want to work for somebody else.  I wanted to be my own boss.

People said, “Go back to school, and get a job.” I knew that’s not what I wanted to do.  Not only did we go into debt…

It really was a trying time in my life.  We were so stressed out.  We were literally stressed to the bone.

The reason I brought up religion before is because…

One day my wife came up to me just like every Sunday and said, “Let’s go to church.”

I was so stressed, broke, didn’t have money, and lost our house.  I didn’t know who to blame, so I blamed God.  I blamed my sponsor.  I blamed everybody in my life.  I kind of lost all…  I really didn’t want to live at that point.  I was very, very frustrated,

I told my wife, I’m not going to church anymore.  If he really loved us, he wouldn’t have put us in this situation.  That was really hard for me, because that was my life, we were married in the temple, and that was my life, and I blamed him.

You know what, I woke up the next morning and my face was completely paralyzed.  Bell’s Palsy.  The doctor said it was from stress.  Do you know what I really believe it was?

When I really realized that I needed to take responsibility for my actions, for my struggles, where I was; I made it happen and I’m so glad he didn’t punch me in the face! haha

I got it back, mostly.  You can tell when I’m smiling sometimes.  I’m not smirking at you when we are in pictures.

I tell you that story, because it was a really big impact in my life.

I could go on and on about how much money we are making now and all the success that we’re having, but do you know what really makes me happy?

When I see my team succeed.  I’ve been holding a daily webinar every day for a year.  At first, nobody was succeeding,  just like normal.  I kept plugging them in; plugging them in.  Dave and Dave said, “Do the eight core commitments.” 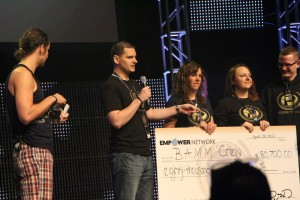 Guess what I made my daily assignment?  The eight core commitments.  I just re-worded it a little bit different to trick the team into actually doing it; but, they did it!

You know what?  I had the privilege of sponsoring people like Kevin Sousa, who met his brother that he never knew he had from a blog post.

I had the privilege of sponsoring someone named Robert Brown.  I met him in San Diego.  He was at the $25 level.  I shook his hand.  He had this passion.  He had this belief in his eyes; and I believed in him, that he could make it happen.  Not only is he all-in now, he had an $11,000 month four months later in his business.

Robert sponsored a guy named Travis Holder who had an $8,000 month just last month, and he quit his job.

These are short periods of time; this is four and five months into the business.  What did they do?  They plugged into our daily action plan which I got from Dave.  They plugged in, they followed it.  I told them to blog daily, to market daily, to listen to personal development, to get on our mindset call that Paul does.  We teach them exactly what Empower Network does.

The bottom line is; I love what I do now.  I was calculating our income for last month.  It’s kind of hard, because we formed a partnership, then we had a four person partnership later.  We had to calculate two accounts.  We actually made $42,000 in Empower Network last month and our life has never been better.

I really truly love what I do and I do what I love with Empower Network.

I realized in 2012, this is the first year…  I’ve been full time since 2007 when I quit my job.  This year is the first year that we have ever had to write a check for our taxes.  I don’t know about you… some people think that is bad.  If you get a refund every year that you are in business, you are probably not making any money. haha

I didn’t tell my wife that I was going to bring her and the family up on stage! But I saw Lawrence Tam do it, and I really want to do it so I did… 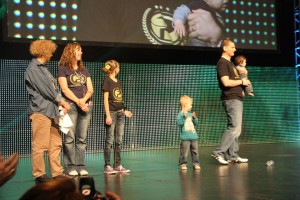 I want to tell a quick story about my wife and her dedication.

Even through all the hard times, even through losing our house, going in debt, not being able to pay anything off…  She was there, every step of the way.

There was one day that we literally had $500 to our name.  She was nine months pregnant with Owen, our now two and half year old son.    I didn’t know how we were going to make the mortgage.  What happened was I planned a webinar.  I said, okay, I’m going to sell this Facebook product.  It’s just going to pay me PayPal.  I need to do this webinar to pay our bills, to pay for our boy.

Then 30 minutes before the webinar, she literally went into contractions.  She was ready to give birth to this wonderful baby boy and we didn’t have any money.  No money.  This webinar would pay us money.  I said, you know what, let’s just forget the webinar.  Let’s go, we’ll make it happen.

We did the webinar, we made $750 or so, just enough to get us by, and then we went and had our boy, Owen.  I am so proud that I have a supporting wife, someone that is there for me, all through the hard time and all through the successes that we’ve had.

Because of Empower Network, because of our focus, because of this business… we will never miss another day of our kids’ lives, especially our new kid that is six months old.

PS.  Here is my Big Secret to Becoming Wealthy

If you enjoyed my inspirational true story, retweet and comment please…

What Others Think Of Mike: